The Austin of today is not the one Kelly Strain remembers from when he left more than 30 years ago.

Driving tourists around the city as a Lyft ride-share driver, Strain, 56, said he doesn’t ever remember seeing so many new high-rise buildings, tourists walking around and homeless people sleeping on the streets. 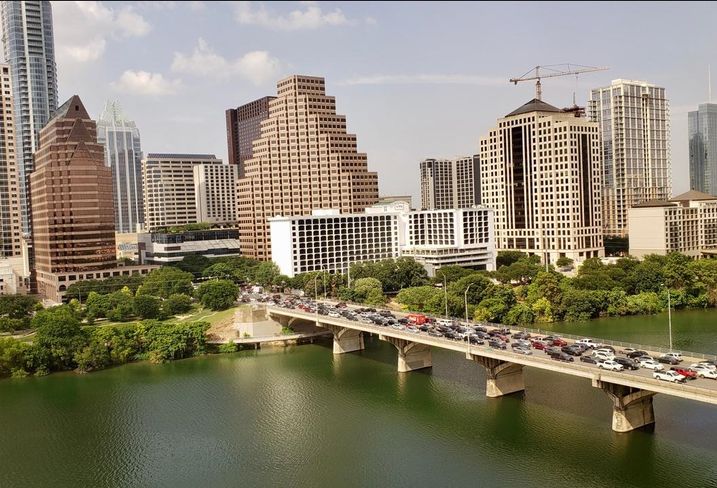 Bisnow/Joseph Pimentel
Commuters fill the bridge trying to get into downtown Austin.

“When I went to school here so many years ago, Austin was a hidden gem,” Strain said as he drove a Bisnow reporter around the city. Strain lived in Newport Beach, California, before moving back to Austin to take care of a family member a year ago. “This was just a college town.”

Today, Austin is more than just a bunch of students who fill the University of Texas and surrounding colleges.

It is a bona fide metropolis.

Once known only for being Texas’ state capital and for its “Keep Austin Weird” tag line, Austin in recent years has become a major tech hub and an attractive destination for those seeking an affordable lifestyle.

As the city grows, Austin, like other tech regions such as San Francisco and Los Angeles, is grappling with big-city problems — longtime residents are being displaced due to higher rent, traffic congestion is getting worse and there is a growing homeless problem, experts said.

“Austin has grown so furiously, so fast, in such a short amount of time,” Texas Standard Editor Terri Langford said Thursday at the National Association of Real Estate Editors conference in Austin. “With so much growth and housing prices skyrocketing, we’re pushing out the younger workforce and the diverse workforce to the outer edges. That’s something that Austin is slowly grappling with.”

Langford went to school at the University of Texas in the 1980s. She remembers when Austin was mostly a two-industry town — government and university.

Her return 15 years later surprised her. 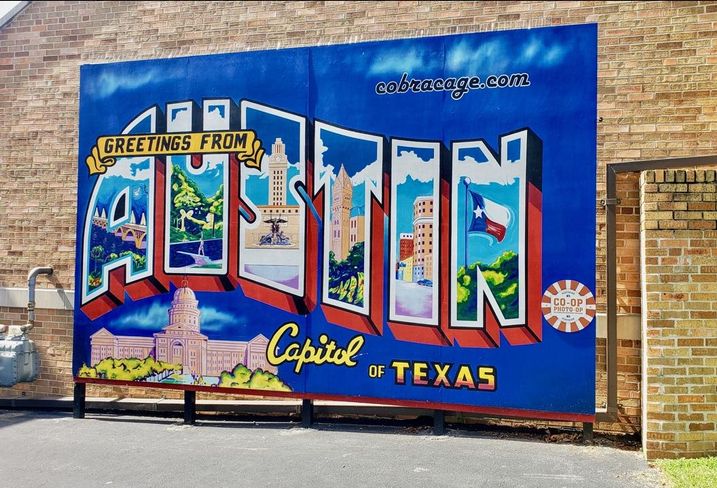 Tech invading Austin is nothing new. The city has had a tech background for decades.

In the 1960s, defense electronics contractor Tracor, IBM and Texas Instrumentsset up headquarters in Austin. In the 1970s, Motorola and the University of Texas’ IC² Institute set up shop. In the 1980s, Microelectronics and Computer Consortium and Dell placed headquarters here, according to BuiltInAustin, an online community that supports tech startups in Austin.

Those tech companies have mostly come and gone.

Today, a new generation of tech companies is emerging.

The downtown skyline displays the names and logos of Google and Silicon Labs. Northwest of downtown, in the Domain mixed-use development, more than 3.4M SF of office space has been built or is under construction, according to the Statesman. Facebook, Amazon, HomeAway and Indeed have signed leases for office space and/or buildings, the Statesman reports.

In May, Apple announced it would lease a 93K SF building ahead of the construction of a $1B campus on a 133-acre site in North Austin.

The Austin-American Statesman’s Shonda Novak said tech companies are moving in because of the higher-quality — and affordable — way of life. The median price of a single-family home — $407K — is an all-time high in Austin. The price is more than Houston, San Antonio and Dallas. But it is significantly cheaper than the median price for homes sold in Southern California in May: $530K, according to CoreLogic. In San Francisco, the average price of homes sold in May was $860K.

“[Austin] really attracts a lot of people who were priced out of other big tech centers like San Francisco and LA,” Novak said. “They are having such a hard time [finding] housing [in other cities] that they are flocking here.

“For companies in the East and West Coast, they consider us a bargain.” 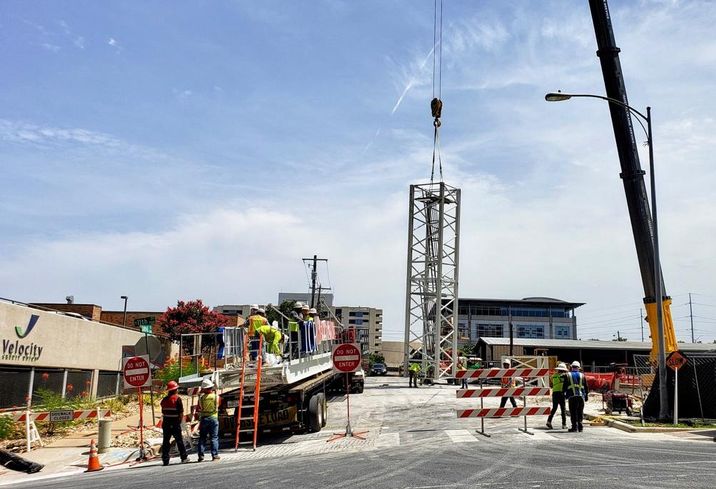 Bisnow/Joseph Pimentel
A construction crew working on a project in downtown Austin, Texas.

It was downtown Austin — inside The Armadillo World Headquarters — where Willie Nelson made a name for himself.

It was Austin where a homeless cross-dressing eccentric, Leslie Cochran, ran for mayor three times — finishing second once — and captured the hearts of Austinites. Cochran embodied Austin’s famous “Keep Austin Weird” saying and a statue is being erected in his honor.

Lured by affordability, the eclectic lifestyle and Austin’s natural beauty, people are coming in droves.

The city — the most liberal major metro in the state — has become one of the fastest-growing cities in the country. From 2017 to 2018, about 145 people a day were moving to Austin, according to the U.S. Census Bureau.

The city’s job market is thriving — largely due to the tech industry — and that is one of the reasons for the influx of new residents, according to USA Today.

Austin’s population is expected to hit 1 million by next year.

As new residents move in, longtime residents are being displaced.

In the past five years, rent has grown by 17.2%, compared to the national average of 13%, according to Curbed Austin, citing a study on Apartment List.

A Freddie Mac report released in June found that only 18% of new apartment units built after 2010 were for very low income households. Prior to 2010, 35% of units built were for very-low-income residents.

“What’s most concerning is that the loss in affordable housing units happened even though Austin’s supply of multifamily housing grew,” Freddie Mac Vice President of Multifamily Research Steve Guggenmos said to HousingWire. “Nearly a quarter of Austin’s units were built after 2009 and a high percentage of these new units are not affordable for very-low-income renters. Like a lot of cities, they just can’t keep up.”

Austin’s homeless situation is getting worse. The number of homeless people in the city reached 2,255, up 5% from the previous year, according to CBS Austin. 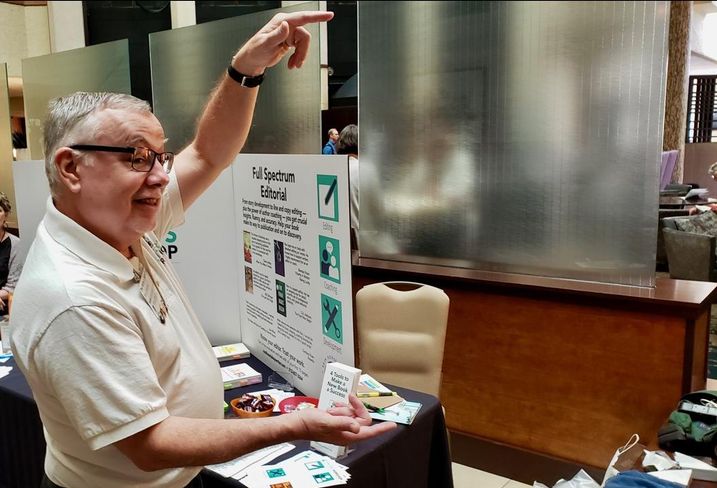 Last month, the Austin City Council approved a new $8.6M 100-bed homeless shelter. The city is also allowing homeless people to sit, sleep and set up tents on the sidewalk or any public areas as long as they are not blocking a pathway.

Lyft driver Jose Gutierrez, 36, moved to Austin three years ago. Originally from Laredo, Gutierrez said she has noticed rent going up and gentrification seeping in.

“You see them on the streets,” Gutierrez said, referring to homeless people. “There are some people being displaced because of all these new developments. But I hope the developments won’t too severely impact longtime residents.”

Michele Sandoval, 63, an information technology project coordinator, moved to Austin eight years ago to start over after getting a divorce.

Sandoval said she loves living in the city.

“People are nice and there are so many things to do,” Sandoval said.

But she also noticed the influx of new residents.

Asked if Austin can keep it weird, she said only if the new residents embrace the city’s eclectic culture.

Writer’s Workshop Director and author Ron Seybold has lived in Austin for 41 years. Seybold recalls a time when the city’s popular Dirty Sixth Street was a collection of skid row dive bars.

Some of the areas around downtown were fruit stands where farmers sold peaches, he said.

The single-family homes in Northwest Austin were selling for $40K and it was so new, Seybold said, tarantulas and scorpions were commonplace.

Seybold predicts as more people come to live in Austin, it will get harder for young families to find an affordable house within the city. He said housing is Austin’s No. 1 problem.

“They are going to move out and further away from the city,” Seybold said. “We’re on a trajectory here to keep people out that don’t have economic wherewithal to get started. I don’t see them fixing the housing problem in the next 10 years.”

However, Seybold does like the influx of new residents and jobs. It is a bit of a Catch-22.

“The world is coming to Austin,” Seybold said. “There’s plenty of talent, imagination and passion. … This is a beautiful place, with a progressive mindset. I think there’s a nice interaction of ideas here that have been established and those that can make those better.”

Affordable Housing: Is Austin Becoming the Next Palo Alto?