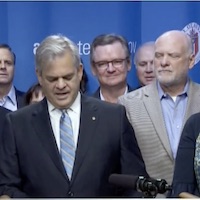 The full article can be found here.

AUSTIN (KXAN) — The nonprofit organization Affordable Central Texas announced Wednesday that Texas Capital Bank will be the first bank to fully invest in the Austin Conservancy Fund, according to a press release from the office of Mayor Steve Adler.

The Austin Conservancy Fund is an open-ended social impact equity fund aimed at making sure properties meet the Community Reinvestment Act requirements. By purchasing multifamily properties, the fund will theoretically maintain affordable rental rates in the city. Its goal is to preserve workforce housing apartment buildings, prevent them from being gentrified and protect existing tenants so they won’t be displaced.

“The magic of Austin is in its people. Keeping the city affordable for teachers, artists, first responders, restaurant workers and other working people is crucial to preserving what everyone loves about being here,” said Mayor Adler. “With this investment, Texas Capital Bank has shown leadership that we hope will inspire others to support the Austin Housing Conservancy Fund and its work to preserve affordable housing for the moderate-income workers who make this city special.”

The ACF launched in 2018 with the purchase of three multifamily properties totaling 792 units and 1,200 residents, per Mayor Adler’s press release. The 10-year goal of the fund is to preserve over 10,000 rental properties for 15,000 Austin residents.

While Texas Capital Bank is the first bank to become an investor in the ACF, in September Wells Fargo and the U.S Conference of Mayors made a $150,000 donation to the fund.

South by Social: Austin is the capital of impact entrepreneurship, too